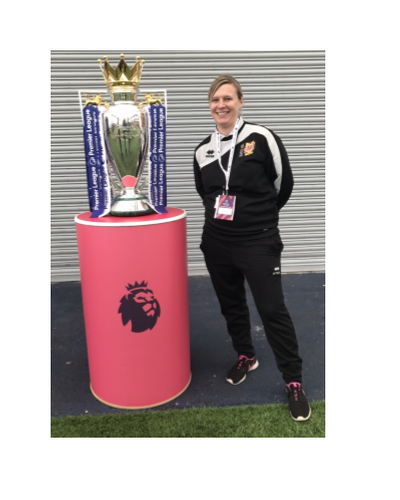 Holly has played football since she was a young child and used this passion to kick start her career in the game.  Her journey began in 2007 as a volunteer at school and in her local grassroots football club and has seen her go from strength to strength during that time.  Aged just 19 years old she had already achieved her coaching qualifications and went to work in the USA coaching football across the East Coast of the United States.

During her time at MK Dons SET Holly has been a key part of the team that has led on exciting and ground breaking projects to encourage thousands of women and girls in the local community to be involved in football such as our Premier League Girls Programme. Holly has also had the chance to be involved in high profile and prestigious events that have helped put women's football and Milton Keynes on the global arena, such as hosting the Women’s FA Cup Final and FA Youth Cup Final at Stadium MK as well as several England Women’s games.

Holly has much to celebrate and as well as achieving her FA Youth Award and UEFA B Licence  during her time with MK Dons SET she is now able to join the top flight of female coaches in the country by undertaking her prestigious UEFA A Licence.  Quite rightly, Holly is delighted to be leading the way for female football in her coaching saying;

‘I’ve been very proud to undertake my UEFA A Licence Course this season and can’t wait to complete the award. Even more so as currently it means I would be one of just 50 women in the country to have achieved this qualification.'

And the success goes on as Holly's team led by James Honeyman, Football Development Manager, celebrate their most successful seasons so far with the highest ever number of female players from MK Dons Girls Regional Talent Club and MK Dons Ladies representing their country; including four full International players.

MK Dons SET wishes Holly and all the women and girls good luck for the future and a Happy International Women's Day 2018.

For more information about opportunities in female sport please go to www.mkdonsset.com