FANS ALLOWED BACK TO SMK TO WATCH MK DONS WOMEN

Fans allowed back to SMK to watch MK Dons Women 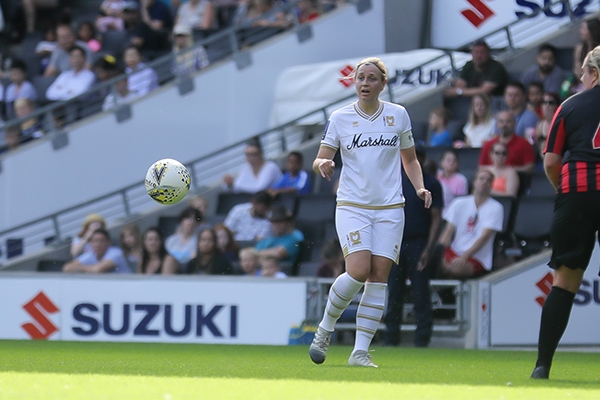 Up to 1,000 supporters are to set to be allowed return to Stadium MK later this month, when MK Dons Women take on Watford Ladies in their first league game of the 2020/21 season.

Charlie Bill’s side get their FA Women’s Premier League Southern Premier Division campaign underway on Saturday 20 September, and Government guidelines will allow a maximum of 1,000 spectators to be in attendance.

Fans will see first-hand the Covid-secure safety measures which have been put in place at Stadium MK, such as one-way systems; temperature checks; increased cleaning and sanitization and the use of face covering whilst entering and moving around the stadium.

Last season, MK Dons Women enjoyed not only the best attendance for any game in the division but also the highest average crowd - a show of support they are keen to build on this Season.

Manager Charlie Bill said: “We’re looking forward to the season, which has been made even more special as we’ll get the opportunity to be the first team to play in front of spectators at Stadium MK.

“We are extremely grateful to all our members and supporters as well as, of course, our shirt sponsor’s Marshall Amplification - we are so proud to be associated with such an iconic brand.”

Is the opportunity for supporters to purchase an MK Dons Womens membership, which provides access to all permitted home league and cup games at Stadium MK as well as the chance to bring up to five under-17s for free.

An MK Dons Womens Membership is priced at £35 while casual match tickets are also available, with under-17s attending with a paying adult entitled to FREE entry. For more info, please click HERE.

To purchase a ticket for the upcoming clash with Watford Ladies, or for more information regarding MK Dons Women, please click HERE.

Women’s football has grown at a rapid pace since England’s success at the 2019 FIFA Women’s World Cup, not least in Milton Keynes.