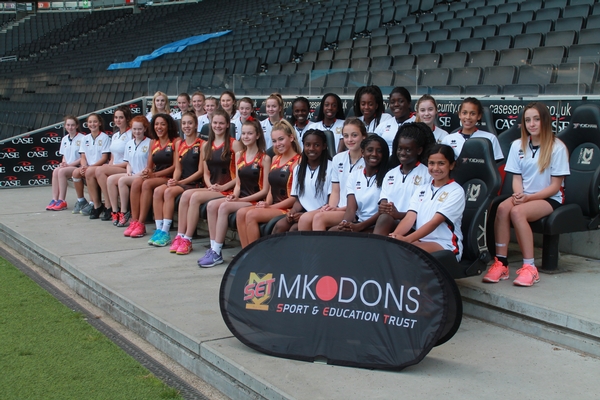 MK Dons Sport and Education Trust (SET) are pleased to announce we are partnering with successful local netball club MK Netters to establish themselves in the netball circuit as a community and high performance club for aspiring women and girls to get into the sport. Netball is the fastest growing women's sport in the UK with over 1,000,000 women and girls playing the sport every week, and following on from the success of our Premier League girls programme and Ladies teams, we are looking to reproduce that success on the netball court. Short term goals are for the SET to become a breeding ground for local netball talent, and to offer a pathway into higher level participation through high quality coaches and competition. Longer term, the SET will look to replicate the programme that Wasps have created in Coventry, with a National Performance League team and eventually, a Super League NPL side.

Legacy manager Ben Lawrence expressed “The links the SET has within the community will allow us to create a solid foundation on which the programme can continue to grow. Our partnership with MK Netters has given us a great insight into what’s needed to succeed on and off the court and we look forward to expanding that out with other clubs coming on board.”

The SET has registered 3 age groups into the regional qualifiers in Southampton when their 3 newly formed U13, u14 and U16 performance squads went head to head with the best in the South region qualifiers with the aim of securing one of the coveted top 8 spots in each age groups regional league. Those 8 places then go onto fight it out over the season for a chance to go to National Club finals in April next year. The girls had an exceptional first outing as a MK Dons SET side, with all three making the top 8, and securing competitive netball for the season.

Julie Tucker, Head Coach at MK Netters, who is working alongside the SET on this said; “This is great for netball, great for women and great for our area as we know we have these amazing local youngsters and adults who end up going to other areas because we haven't got something on the doorstep for them to continue their development. With SET and MK Dons entering this arena the future is looking very bright for netballer's in Milton Keynes and the surrounding areas.”

John Cove, CEO of MK DONS SET said: “we are delighted to add Netball to the range of sporting opportunities we deliver locally. The fact that this is in partnership with one of the strongest local clubs makes the project even more exciting – who knows where it will end? Perhaps an England International Netball player someday!”

If you want to know how to be a part of the latest MK Dons SET project, please contact Ben Lawrence or Julie Tucker on the details below.