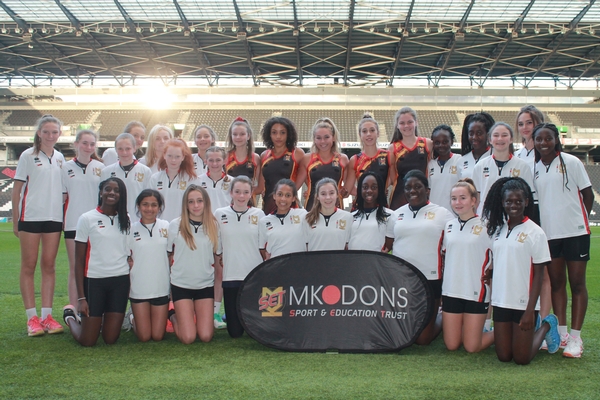 It hasn’t taken long for the MK Dons SET netball players to catch the eye with the big names in the game, following the announcement that the SET has created 3 performance teams to compete in the south regional competitions at under 13, 14 and 16 levels. All of the girls have started the season brilliantly, all loving life representing the Dons in their shiny new kit. The under 13s have started well, winning 1 out of 3, the under 14s are 2 from 3, and to complete the set, the under 16s are off to a flyer winning all three of their matches.

To add to these promising starts, there have been a number of girls who have caught the eye and have been selected to represent the Wasps and Mavericks Super League franchises.

Netters and SET Head Coach Julie Tucker said, “This is an amazing achievement for the club with more of the girls trialling in the coming weeks – I’m sure we will be adding more brilliant girls to our hall of fame”

To add to this amazing news, U16 Holly James has also been selected to trial with England this week, showing the fantastic network of players MK Netters and MK Dons SET have at their disposal. Holly joins a growing list of players that the SET has taken to England level, following in the footsteps of current Ladies first team players Abbie Roberts and Amelia Hazard who have represented England in women’s football.

We wish all of the girls all the best with their time with the SPL franchises, and to continue the great start to the MK Dons netball history.