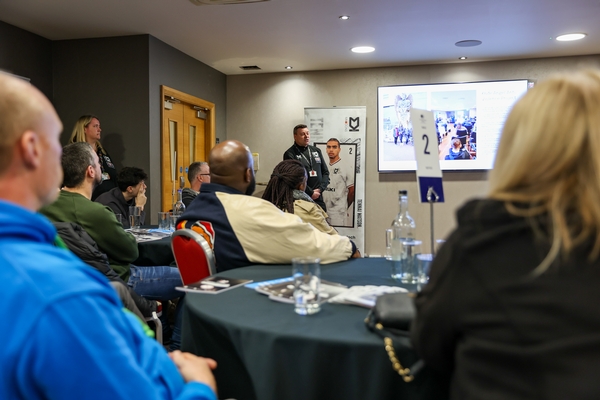 On Tuesday 24th January, Stadium MK welcomed MK Dons SET Friends of the Trust to talk, discuss, and listen about the impact MK Dons SET has had in the community over the past year.

Ahead of MK Dons Sky Bet League One fixture against Shrewsbury Town, SET thanked and Friends of the Trust for their support over the past year. Their valuable support has allowed MK Dons SET to support the local community through a variety of different means. The event, introduced my MK Dons Business Development Manager Ed Arnold, saw MK Dons Staff, Directors and Partners discuss the impact MK Dons SET has had in the past year.

MK Dons SET staff, Kelly Day, Paul Stewart, James Gibb and Jon Dewick spoke of the impact the club has had in the community. In 2021/22 MK Dons SET were awarded South East Community Club of the Year, holiday camps delivered to over 1000 Youth across Milton Keynes, Boys Pathway saw 400+ participants per week, 350 Christmas hampers were distributed feeding over 1000 people for a week this Christmas.

In 2022, MK Dons SET acquired two new venues in Brooklands and Woughton. These venues will provide the opportunity for community groups within the city of Milton Keynes to host events, partake in sessions, further implementing MK Dons SET at the centre of the community.

The future is bright too, as James Gibb and Jon Dewick noted. The boy’s talent pathway sees 400 plus participants playing community football each week through mixed ability sessions. 8 teams represent MK Dons SET in weekly league fixtures as we grow the pathway as well as relaunch our grassroots club coaching programme.

Women’s and Girls football has also seen success, thanks to support from Friends of the Trust, across the first team and under23’s squad there are 14 graduates from SET’s RTC programme. Furthermore, MK Dons SET continue to link with local schools, providing opportunities for girl’s cup competitions. The first team currently sit 9th in the FAWNL despite playing fewer games and achieved an upcoming county cup final date. Whilst a variety of young players have seen individual success in being selected for international training camps, furthering their development and path to the first team.

We also heard from Martin Lloyd, Director at Suzuki GB, who discussed the importance of suporting the local community through support both financially and through personnel. Suzuki GB have been huge supporters of the Club for 9 years as both Freind of the Trust and Title Partner of MK Dons.